I remember seeing a bottle of Żubrówka Vodka as a child in my dad’s drinks cabinet and being fascinated by the blade of grass in the bottle. Now, that I am allowed to drink it, I am still fascinated by the grass, but more so by the vodka.

Żubrówka Vodka, a dry rye vodka, is infused with a tincture of bison grass which gives it not only its name, but also its distinct colour (a very pale yellow) and its unique herbal flavour, which is light and not at all overpowering, with just a bit of sweetness coming through, almost like a touch of vanilla. 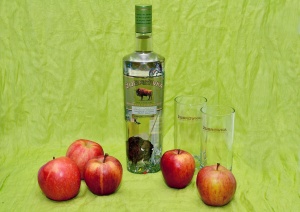 It is a famous and iconic Polish vodka dating back five centuries and originated at the Polish-Belarusian border where the bison grass grows in abundance and the European bison still roams freely.

For me it is one of the best vodkas I have tried, as I really love its taste neat and in cocktails.

To drink it neat Żubrówka Vodka is best served straight out of the freezer.  It is great as a digestif, for example after a heavy meal. You could give it a try after this year’s Christmas dinner.

But Żubrówka Vodka is also a very versatile cocktail ingredient. I had great fun experimenting in my kitchen and we both enjoyed the cocktails during our photo shoot.

The most common way to mix it is straight from the freezer with apple juice and a touch of lime juice. You are left with a cocktail that tastes almost like apple pie and everybody loves apple pie! I think it works best with cloudy apple juice.

Another easy cocktail is Żubrówka & Cassis. To make it extra special pop some red and black currants in your ice cube tray before filling it up with water and put it in the freezer. When they are frozen, fill a glass with the ice cubes, add one shot of vodka and fill the glass up with the tonic water. Add a dash of Crème de Cassis and you are done. It looks pretty and tastes wonderful refreshing.

I also made a Kiwi Martini with Żubrówka Vodka, which also turned out to be excellent. For two glasses, I put 2 ½ chopped up kiwis in my food processor, added 2 shots of vodka, juice from two limes and about two tablespoons of agave syrup and hit the ‘on’ button. I strained it through a sieve into martini glasses and decorated them with kiwi hearts. 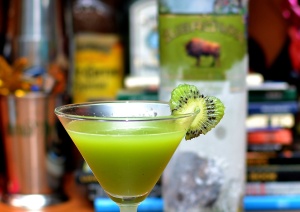 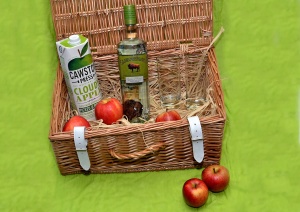 Oh, and in case you are wondering, the bison grass blade in the bottle is just for decoration.