I have never seen another production of the Pulitzer Prize winning play by David Mamet, nor did I watch the 1992 movie before going to see the performance directed by Sam Yates at The Playhouse Theatre last week. I don’t know why, but somehow I always presumed that Glengarry Glen Ross was all about corporate greed in the 1980s and the kind of people I despise. I was dead wrong, this play is about ordinary guys, trying to survive and hang on to their lives, jobs and dignity in a world that has become increasingly cut-throat and competitive.

It is about people like you and me who find themselves, through no fault of their own, in a situation that jeopardises everything they have worked for and who are left wondering if they will be able to put food on the table or pay a medical bill next week, next month or next year. This makes ‘Glengarry Glen Ross’ just as relevant today as when it was first performed in 1983. Maybe even more so, because, more than ever and nearly 35 years later, we are still faced with the same dilemmas and problems – plus a bunch of new ones. 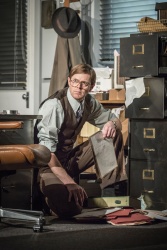 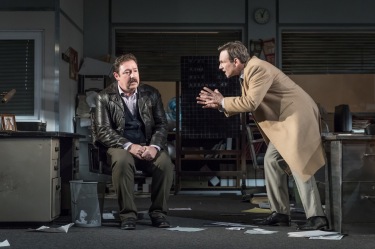 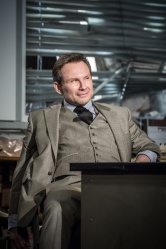 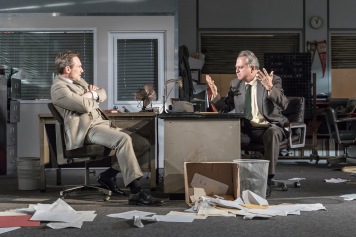 John Williamson (Kris Marshall) is the office manager of a real estate business owned by Mitch & Murray. He holds, to some extend, the careers of the other employees in his hands, as he is the man who assigns the leads, giving the salesmen the names and addresses of potential clients. Loud mouthed, blustery Dave Moss (Robert Glenister), cocky and ruthless charmer Ricky Roma (Christian Slater), once successful but now on his way out, Shelly ‘The Machine’ Levene (Stanley Townsend) and ageing despairing George Aaronow (Don Warrigton) are the salesmen who depend on those leads and all four a vying for the best ones. They must sell the most property and make the most money to become top of the leader board and win a car or they could face losing their jobs. Roma is currently in the lead and the others are willing to use everything from flattery to bribery, lies to threats, intimidation to burglary to get better leads. When the office does get burgled and the leads are stolen (along with the phones), everybody becomes a suspect. 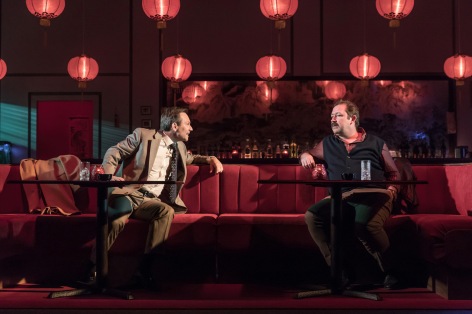 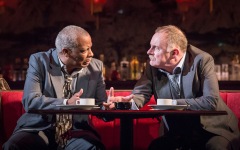 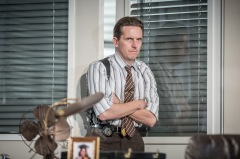 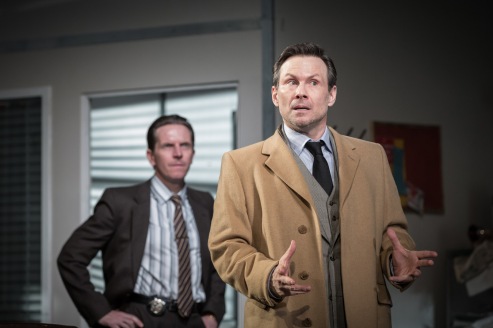 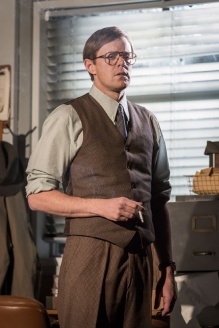 It would not be fair to single anybody from the stellar cast (which also includes Daniel Ryan as Roma’s latest client and Oliver Ryan as the police detective Baylen) out, because they were all wonderful in their roles. They all play their characters spot on and they had great chemistry on stage. Brilliant casting!

Saying that, I have to make an exception for Mark Carlisle, one of the understudies, who had to take over the role of David Moss when Robert Glenister became unwell during the first act on the night I attended. Despite it being so early on in the run of the play and him being the understudy for four of the roles, he pulled it of splendidly and he received a well deserved mid-play applause from the audience.

P.S.: If you have a problem with profanity, you might want to give this one a miss. There is a reason it has been called ‘Death of a f***ing Salesman’. If you don’t, you’ll enjoy it as much as I did.

Performances are at 7:45pm every day, excluding Sundays, with a matinee every Thursday and Saturday at 2:30pm.