The winner is Laura Banks (lozzle77) (via website). Congratulations!

Following its run on BBC Two this summer, Acorn Media International is delighted to announce its release on DVD. And London-Olios has a copy to give away to one of our readers.

I vividly remember watching Peter Weir’s critically acclaimed big screen when it was released in 1975 and several times when the movie was shown on TV and the mystery of it all always mesmerised me. There was also the question whether the story of the mysterious disappearance of three schoolgirls and their governess in 1900s Australia was just fiction or based on a true event.

For those of you who are unfamiliar with Picnic at Hanging Rock, it tells the story of a group of schoolgirls from Appleyard College who take a day trip on Valentine’s Day to dark and brooding Hanging Rock. When the girls and the governess go missing during the picnic, the event has repercussions not just for the school, but for the whole town. Theories fly around, secrets are exposed, and hysteria sets in. 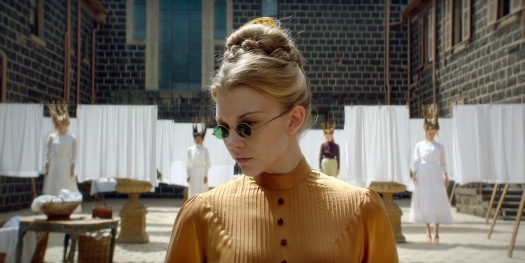 This six-part drama has more time to explore the themes of the novel, repression, sexuality, freedom and suffocating respectability as well as mysticism, nature, culture, than the movie had. It is also able to show the impact the unsolved mystery has on everybody involved in more detail. an unsolved mystery and the immense burden of unanswered questions.

In which country is Picnic at Hanging Rock set?

You can enter once via each channel (duplicate entries will be deleted) and each time you do, your answer or comment will count as a separate entry, so you can have four chances to win. You can enter until midnight on Sunday, August 26th, 2018. There is one prize only and the winner will be drawn at random, contacted privately and announced on the London-Olios website. The winner has two weeks to claim their prize; if a prize goes unclaimed, we will have another draw.

41 thoughts on “Win Picnic at Hanging Rock on DVD”