A Flea in her Ear by Georges Feydeau

A Flea in Her Ear is a splendid example of the classic French farce, a risqué play from the turn of the century, written by Georges Feydeau in 1907. It has a rich cast of interesting and quirky characters joining a crazy merry-go-round of mistaken identity, misunderstandings and misconceptions in a plot with more twists and turns than a slalom run.

Madame Raymonde Chandebise loves her husband Victor Emmanuel, but lately suspects that he is seeing other women, as things in the bedroom are no longer what they once were. She confides in her best friend, Lucienne, who comes up with the idea to write him a love letter from a secret admirer and to set up a meeting in the infamous Hotel Coq d’Or. From here on, events spiral hilariously out of control. 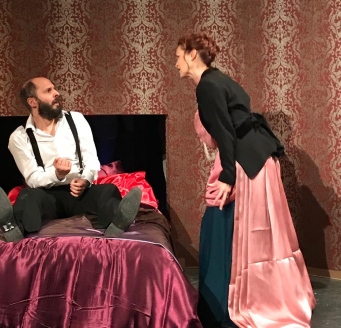 The talented ensemble cast from the Acting Gymnasium played this farce with enthusiasm and fast and furious; though sometimes too fast and too furious, and the speed and shouting often deflected from some of the finer points of the dialogue and characters.

Praise though is due to Michael Claff who portraits two of the characters, Chandebise and Poche, brilliantly (not an easy feat, as he must change character constantly in the last two acts) and to Hanna Luna who is very convincing in her role as Lucienne. I also enjoyed Thomas Witcomb’s portrayal of ex-military hotel owner Ferallion; James Bruce as Camille, Chandebise’s nephew; Thibault Lecat as Chandebise’s business partner Tournel; and Sam Harbrow as Etienne, their butler. Last, but not least, I must mention Tracy Coogan, who gives a stirling performance as Raymonde.

I loved the set by Sonoko Obuchi, which effortlessly transformed from the Chandebise’s study into the foyer and a bedroom at the Hotel Coq d’Or, especially her use of sumptuous fabrics in rich colours, but also the little touches like the photos and paintings on the walls, which changed between scenes.

For performance times and tickets:

The Acting Gymnasium is a unique weekly multinational creative performance workshop, where actors can develop their acting skills, build their confidence, improve their vocal technique, exercise their imagination and, of course, perform in a show…