Last year I decided to go on a walk.

There are various walks that circle London, but I opted for the Capital Ring Walk, which appealed to me for various reasons: I would be able to discover areas of London I had never been too, the 15 sections were manageable and could be tweaked if need be, the stations I needed to get to were all within zones 1-4 and it would not take much more than an hour from my home in South London to reach any of the points where I finished one section to start the next. 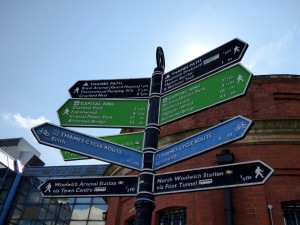 So far so good. After a bit of reading up on it – I like to be prepared – and digging out my maps, I made it my mission to explore suburban London on foot. And, after recruiting a friend to accompany me, I got on a bus to Woolwich to set off  on the first walk.

Info on the practicalities are at the bottom of the article.

But first, here are a few of the highlights of the Southern loop in pictures – from the start at the Woolwich Foot Tunnel all the way to Richmond Bridge.

Woolwich via Severndroog Castle and Eltham Palace to Grove Park ….

The first part of the walk is along the Northern shore of the Thames where you can watch the Woolwich Ferry make its short journey to North Woolwich and back – did you know that travel on it is free for vehicles and passengers? But you are not here to hop on a ferry, but to walk. You can see Canary Wharf in the distance and the mighty Thames Barrier sitting in the river. This feat of engineering was first proposed in 1953 to protect London from flooding and opened in 1984. The barrier can be raised in just 45 minutes and has been quite few times recently, due to ‘astronomical’ tides hitting London.

You carry on through Maryon Park and Charlton Park ( there’s a lovely café in the park) to Severndroog Castle, which is more of a folly than a castle, in my opinion. It was built in memory of a William James, employee of the East Indian Tea Company, by his wife. This is good place for a pit stop, and you can climb the tower and have a bite to eat in the café.

The walk carries on through the ancient woods of Shooters Hill and Falconwood to Eltham, birthplace of Bob Hope and site of Eltham Palace. Built in the 14th century, this was the country residence for many English kings and queens. Ransacked by Cromwell’s army in the 17th century Civil War, it later became the home of a textile magnate and a military college before being taken over by English Heritage. We wanted to have a sneaky look, but we were told that a wedding party was expected at any minute. We walked on a path through fields and pastures and made friends with a few horses and donkeys, all the while admiring the view of London’s skyline. The last two photos are from the wonderful Baring Hall Hotel pub opposite Grove Park station. The food there is great too. 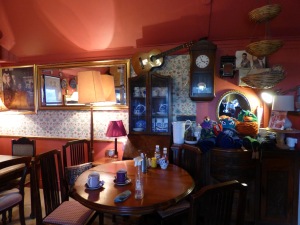 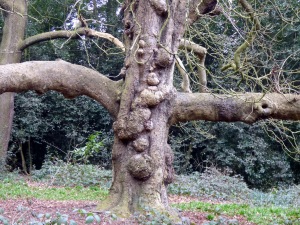 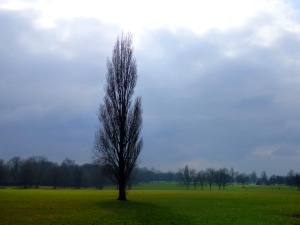 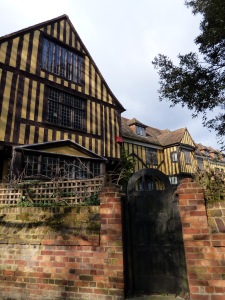 ….and on to Beckenham Place Park and Crystal Palace Park, ….

This next section was a bit dull as it did involve walking through suburban housing estates, but there were a few highlights as well: The Railway Children’s Path near where author Edith Nesbit lived as a teenager and where we encountered a rather splendid ginger cat, as well as the two parks mentioned above. Beckenham Palace Park is a very large park with a nature reserve, interesting trees, a rose garden and a much loved 18-hole public golf course which is currently under threat to be closed because the council wants to redevelop the park. At the centre of the park is a 18th century mansion which now serves as the ’19th hole’ and an information centre about Beckenham and South London at weekends.

Crystal Palace Park is a lot of things: home to an athletic stadium that occasionally hosts concerts (I went there to listen to Bruce Springsteen once. I couldn’t afford the ticket but the sound was great even from outside the stadium), there’s the National Sports Centre with playing fields for a variety of sports and an Olympic-sized swimming pool, there are the ruins from the old Crystal Palace (it had been moved here after the Great Exhibition in 1851 but sadly burned down in 1936), there’s a boating lake, a concert bowl, the Crystal Palace transmitting station which is visible for miles around, and, last but not least, there are dinosaurs. Or at least life-sized replicas. Oh, and I almost forgot – there’s a splendid statue in honour of Guy the Gorilla, one of London Zoo’s most famous inhabitants. 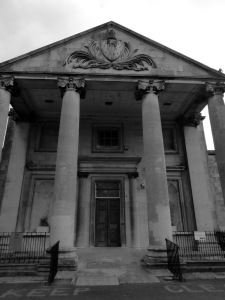 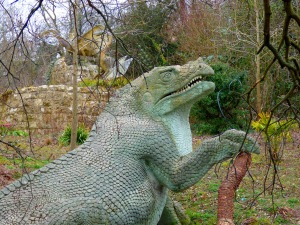 From Crystal Palace the the walk continues through an area which used to be the Great North Wood. There is not much left in the way of woods, but there are plenty of parks and green spaces. Norwood Grove is one of them and after a bit of a climb you get to the 19th century mansion, which was originally built by Arthur Anderson, joint owner of the P&O Steam Navigation Company and is now owned by the council. From here you have great views all the way to the North Downs and even South Croydon looks quite nice from above.

From Norwood Grove it is not far to The Rookery, a formal garden adjacent to Streatham Common. Who knew that the waters of Streatham were once so famed, that there was a Streatham Spa and even Queen Victoria would come to take the waters here? Apparently three springs of health giving waters were discovered in 1659 and the area was known as Streatham Wells. I love discovering these random bits of London history.

Another unlikely architectural gem along this stretch of the walk is Thames Water’s Streatham Pumping Station with its Moorish inspired turrets, first constructed in 1888 for the Southwark and Vauxhall Water Company. 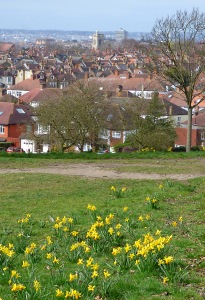 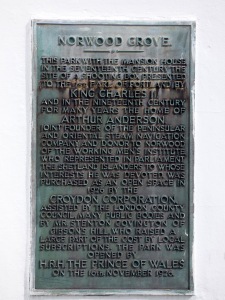 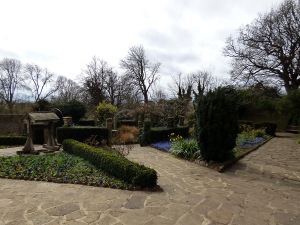 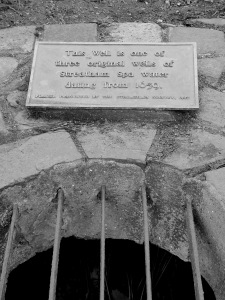 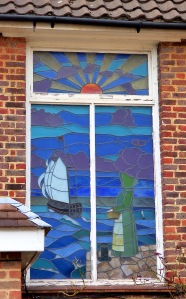 I love that London is such a green city, there are so many parks and open spaces. Tooting Bec is yet another one, but it does have something rather special: Tooting Bec Lido, one of Europe’s largest open air swimming pools. You might want to consider this if you are walking on a hot summer’s day and bring your bathing suit.

The next building of significance is the notorious Wandsworth Prison, the largest prison in the United Kingdom. This thoroughly depressing building was once ‘home’ to writer Oscar Wilde (before he was moved to Reading Gaol), Great Train Robber Ronnie Biggs, East End gangster Ronnie Kray, singers Pete Doherty and Gary Glitter and even the assassin of Martin Luther King, James Earl Ray.

We wandered through St. Mary’s Cemetery in Wandsworth and past the Wimbledon Mosque, established in the late 19th century. From there it wasn’t far to Wimbledon Park, home of the All England Lawn Tennis & Croquet Club and a lake with a large number of swans.

Adjacent Wimbledon Common is a large area of heath and woods and Wimbledon Windmill is its most striking landmark, the last surviving hollow post flour mill in the country. Right next to it is the clubhouse of the London Scottish Golf Course, the third oldest golf club in England. Sports is a big thing in this part of London: you’ll find major clubs for golf, tennis, football, rugby, running and riding.

My favourite thing about this part of the walk?  The beautiful ancient trees and woods. We walked there in April and everything was so green. 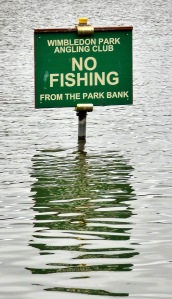 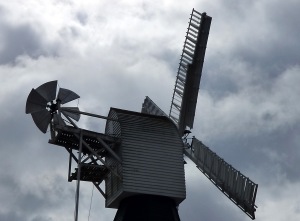 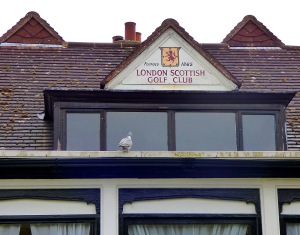 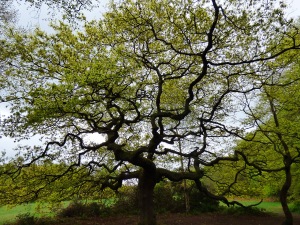 …and finally to Richmond Park and back to the Thames.

Richmond Park is the largest of the Royal Parks and also the largest urban park in Europe. As we entered the park we immediately encountered one of its famous herds of deer and a fantastic photo opportunity. There are over 600 deer in the park, both fallow and red deer, and their ancestors have been roaming around freely since 1529. Up the hill and to the right of Spankers Hill Woods is White Lodge, a Georgian listed building that was once a royal residence and home of Sir Robert Walpole, Britain’s first Prime Minister. It now houses the Royal Ballet School and a museum.

Crossing the park past the Pen Ponds towards the Thames and Richmond you arrive at Pembroke Lodge, a nice place to stop for a cup of coffee. Today it is a popular wedding venue (even I have been to a wedding reception there), but it started out as a one-room cottage for the Royal park’s molecatcher. As the grand mansion you see now it was granted to Prime Minister Lord John Russell by Queen Victoria and was the childhood home of his grandson Bertrand Russell, the famous philosopher.

Apparently there is also a memorial to Ian Dury, the musician, near the property, but I only heard about this afterwards and will have to seek it out another time.

From here you have sweeping views across the river Thames, the Surrey Hills and, on a clear day, all the way to Windsor. As you make your way down the hill you walk past St. Peter’s churchyard and Petersham Nurseries and eventually arrive at the pastoral looking Petersham Meadows and the herd of Belted Galloway cows grazing next to the river. After crossing the meadow you end up on the Thames tow path from here it is only a few minutes to Richmond Bridge and Richmond, where you can spend the rest of the day shopping – if you still have the energy. Or eat and drink in any of the many hostelries in town and by the river – though for me, sipping a cold beer or cider on the banks of the Thames, watching the rowing boats and motor crafts go by, takes a lot of beating, especially on a warm summer’s evening. 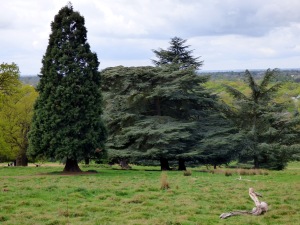 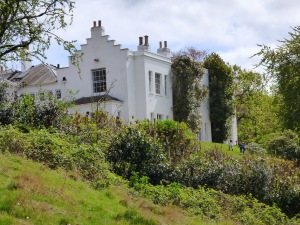 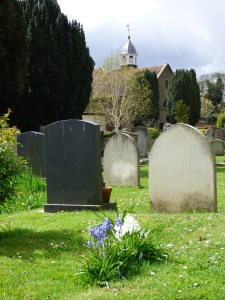 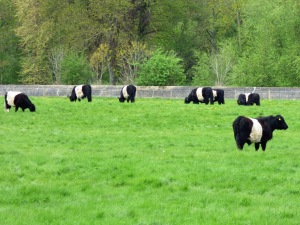 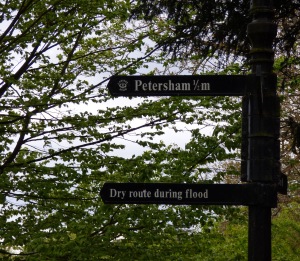 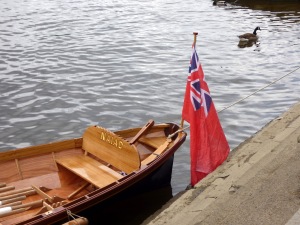 The whole of the Capital Ring Walk is, according to TfL, 126 km (78 miles) long in total, but this may or not be the case, as I found six different lengths, from 115 to 133 km, mentioned in various other sources. We certainly found that the distances are more of an estimate than a fact. The sections are between 6 and 13 km long, but you don’t have to stick to the sections and just walk as far as you want (ideally somewhere where there is public transport to take you back home). Signage can be a bit ropey, but all in all it’s not too bad; just make sure you print out the relevant map with directions from the website. There is also a guidebook available, The Capital Ring by Colin Saunders from Aurum Press Ltd., the latest edition was published in 2014. You are going to walk through a lot of parks, woods, nature reserves and along canal tow paths, but there is also quite a bit of walking through suburbia and housing estates involved, which is interesting in its own way, especially if you come to places like Harrow-on-the-Hill. The Capital Ring Walk is mainly level, with just a few small hills to climb, so should be manageable for people with little or no walking experience. It can get quite muddy in parts after rain, so choose your footwear wisely. I did it mainly in Birkenstock’s, but that’s just me! 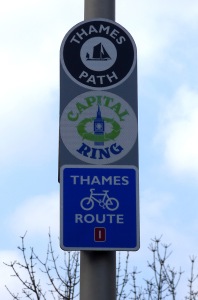 You’ll find all the info you need including where to stop for coffee or a comfort break on this Transport for London website.