Created to celebrate the 20th anniversary of Citadelle craft French Gin, the bespoke tipple is a twist on the classic martini with an affectionate nod to France’s long-standing love affair with the iconic escargot and inspirited in part by the recent beauty trends which have thrust the unassuming gastropod into focus.

Presented exclusively at Ropewalk by the Disappearing Dining club. We’ve always loved the slippery little suckers (not to mention Gin) and so Citadelle has chosen the Disappearing Dining club to exclusively present their new creation in an immersive French gin experience where guests will sip on a three different Citadelle cocktails alongside three deliciously paired dishes created by the DDC chefs…and all in the unique surroundings of our new Ropewalk venue, a bar and dining room inside LASSCO, an architectural salvage warehouse on Maltby Street, SE1. 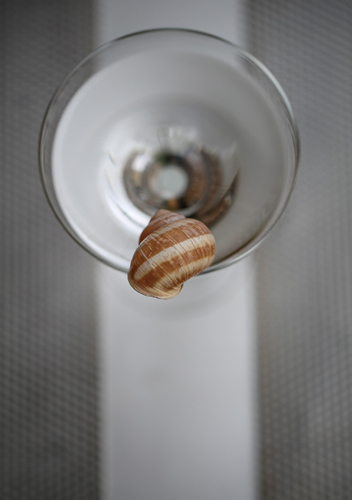 Paul McFadyen, Citadelle’s brand ambassador will be hosting the event and giving a presentation on French gin and the benefits of open flame distillation. Sounds fun right?!

Citadelle is a very special French gin based on a recipe that dates back to 1775. It has a delicate and fragrant nose of fresh flowers, jasmine, honeysuckle and cinnamon. After a few moments, stronger, more herbaceous aromas of anise, grains of paradise and cinnamon develop in a most remarkable way. The appetizing bouquet is reminiscent of gardens in springtime. On the palate, juniper gives way to a voluptuous complexity redolent of fresh flowers, leading into an elegant, round and highly refined finish.

Disappearing Dining Club have been hosting dinners and parties in private and unusual places since 2010, opening their first permanent restaurant, Back in 5 Minutes, on Brick Lane in June 2012. Their third permanent location, Ropewalk, a wine bar and restaurant based in Smithfields opened in April 2016.

Born from the passion of a true innovator in the spirits industry, Alexandre Gabriel, Citadelle was the first of the new breed of artisanal gins. Distilled in small Cognac copper pot stills fired by naked flame, the recipe and production process would be at home in a Michelin starred kitchen.

With this concept in mind, Citadelle is dedicated to culinary creativity, spearheading innovative collaborations and marrying its south-western French heritage with its adoptive British roots.