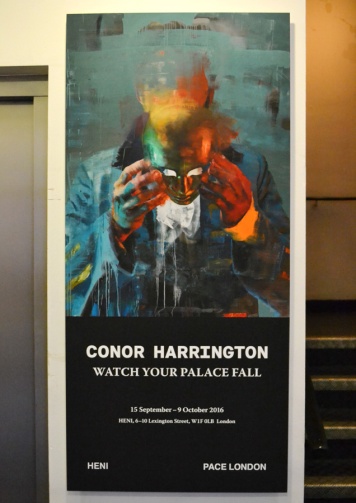 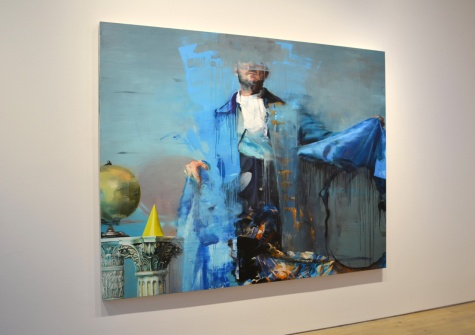 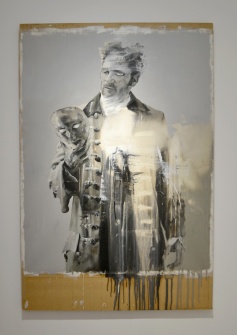 You might have seen Conor’s work adorning the walls in the streets of London and elsewhere around the world, from New York to Puerto Rico and all over Europe: huge murals depicting Renaissance and military inspired figures, often two of them mid-fight. I first came across his work in Dulwich, at the Dulwich Outdoor Gallery Project during Dulwich Art Week in 2013. Initiated by curator Ingrid Beazley, it featured originally commissioned art works by leading street artist from around the world reimagining classic paintings from Dulwich Picture Gallery. I have since ‘discovered’ his work in Shoreditch, in Whitecross Street, in Fashion Street, in Brick Lane and in Soho.

The exhibition show ten new paintings by the artist, featuring the familiar dreamlike battles and his signature mix of realistic brushstrokes and abstraction. A large diptych featuring a tug-of-war dominates one of the gallery’s rooms, with the colours of red and blue representing the classic colours of opposing political parties. One of his recurring metaphors, a golden mask, pops up in several of the paintings. 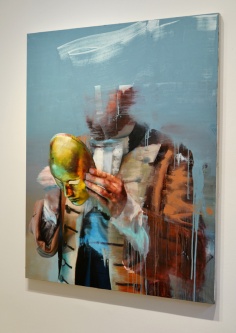 “These paintings are a nod to political deceit, the lies and half-truths told to assume a role and gain power, the prevalence of social media selves at the expense of the real self and the graffiti alter ego, acquiring a pseudonym and hiding your true identity.” – Conor Harrington, August 2016 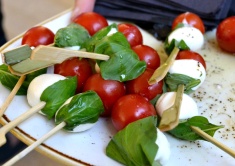 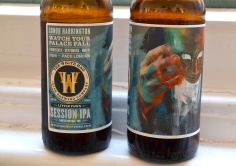 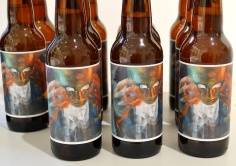 The launch was very well attended and guests were not just treated to art, but also to delicious canapes and limited edition bottles of beer adorned with a label depicting Conor’s painting ‘Hide and Seek’.

The exhibition coincides with the publication of Conor’s first major monograph: ‘Connor Harrington: Watch Your Palace Fall’, Published 27th of October by HENI Publishing featuring more than 150 of his works. There will be a book launch event on Sunday 2nd of October 2016 to celebrate the publication’s exclusive early availability through the exhibition’s duration.