Shake Shack® Leicester Square opened its doors last month with a massive party, serving its signature burgers, hot dogs and frozen custard, all to the beats of a DJ that had everybody dancing, from customers to waiters and the cooks in the kitchen. The atmosphere was great and so was the food and we were incredibly well looked after by all the staff, who couldn’t have been nicer.

Since the original Shack opened in 2004 in NYC’s Madison Square Park, Shake Shack has garnered a cult like following around the world and it is known for its freshly made 100% Angus beef burgers, griddled flat-top dogs, fresh-made frozen custard and crispy crinkle cut fries, beer and wine, great value for money, fun atmosphere and, of course, for its mission to ‘Stand for Something Good’. 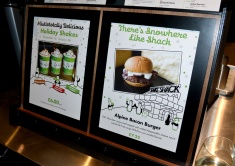 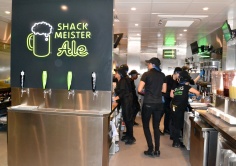 “We’re thrilled to bring Shake Shack to the bustling, iconic center of Leicester Square, where both Londoners and guests from around the world come to gather,” said Randy Garutti, Shake Shack CEO. “Since we opened our first Shack in Covent Garden three years ago, we’ve been amazed at the response, and we’re looking forward to bringing Shake Shack closer to more London neighbourhoods, next year with Victoria Nova and Canary Wharf.”

Like every Shake Shack, the Leicester Square venue on the corner of Wardour and Coventry Street has several unique features, for example the lighting and signage inspired by the neighbouring theatre district. The seating over two floors includes black oak benches and Uhuru chairs, all in the Shack’s signature green and grey with dark wood tabletops, offset by walls covered in reclaimed wood and geometric tiling.

The menu features all the Shake Shack favourites, like the signature ShackBurger®, a classic American ‘roadside burger stand’ burger using freshly ground 100% Aberdeen Angus beef; the SmokeShack®, their delicious take on a bacon burger, made with British free-range Wiltshire cure smoked bacon, chopped cherry peppers and ShackSauce and the flat-top Shack-cago Dog made with a Cumberland-Style Sausage handmade by Jimmy’s Farm using East Anglia Free Range pork. I also like their ShackMeister® with crispy ale-marinated shallots, of course, every cheese & mushroom lover’s dream (i.e. me!) the ‘Shroom Burger, a crisp-fried portobello mushroom filled with melted muenster and cheddar cheeses, topped with lettuce, tomato, ShackSauce™.  Even better, there is the Shake Stack, which consists of a cheeseburger and a ‘Shroom Burger! And the cheesy crinkle cut fries are a must. 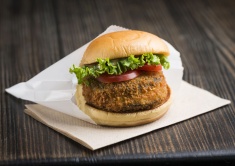 The drinks menu includes a selection of hand-picked local brews including Table Beer from Kernel Brewery, London Lager from Meantime Brewing Company and London Pilsner from Portobello Brewing Company, in addition to Shack exclusives ShackMeister™ Ale and ShackMeister™ Lager, available on tap and brewed exclusively for Shake Shack by Thornbridge Brewery. If you prefer wine, there is Shack Red™ and Shack White™, bottled exclusively for Shake Shack by Lafage in Languedoc-Roussillon, France. They also do some seriously good lemonades and ice teas (I tried the blueberry ice tea) if you are observing Dry January or take the kids.

Leave some room for the Shake Shack’s frozen custard, either with your burger or as a dessert, it really is delicious. Dense, rich and creamy ice cream spun fresh daily make their signature shakes, cones and concretes; frozen custard blended at high speed with mix-ins. The Leicester Square Shack includes three concretes which are exclusive to the location, with mix-ins from local partners: ‘Leicester2’ (see what they have done there?)  – chocolate frozen custard, St. JOHN chocolate and hazelnut brownie with salted peanuts and peanut butter sauce, ‘London Fog’ – vanilla frozen custard, earl grey fudge sauce and St. JOHN brown sugar biscuit and ‘Coffee & Donuts’ – vanilla custard, Workshop Coffee beans, marshmallow sauce and Dum Dum Donutterie Salted Caramel old fashioned donut. If you have a sweet tooth, you’ll be in heaven!

Oh, and you can even pick up a treat for your pooch. Those red velvet dog biscuits sound pretty good to me.

In keeping with Shake Shack’s mission to Stand For Something Good®, the Leicester Square Shack has partnered with local charity Mousetrap Theatre Projects, whose mission is to increase young people’s access to the best of live theatre in London, and donates 5% of sales from each Leicester2 concrete.

“We’re delighted to have been chosen by Shake Shack as their local charity partner for the Leicester Shack!” said Susan Whiddington, Director of Mousetrap Theatre Projects. “With the money raised we’ll bring the magic of theatre into the lives of disadvantaged young people.”