On 1st June, 1967 The Beatles released their eighth studio album, Sgt. Pepper’s Lonely Hearts Club Band, a landmark album that to this day is one of the most important albums ever made, inspiring countless of musicians and delighting millions of music fans. 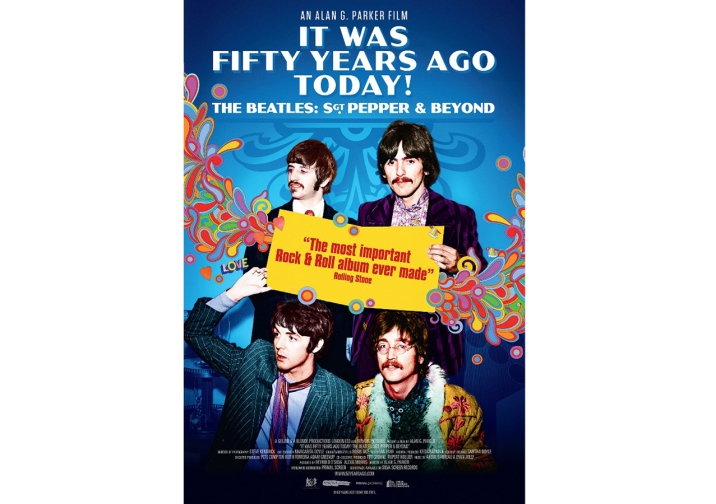 Alan G. Parker’s documentary It Was Fifty Years Ago Today! The Beatles Sgt. Pepper & Beyond is about the twelve-month period of August 1966 to August 1967 which proved to be pivotal in The Beatles’s career. It was the year in which they, fed up with being unable to hear themselves at their concerts and the stress of travelling; and inspired by Swinging London, LSD and the ‘avant garde’, morphed from the world’s number one touring band into the world’s most innovative studio artists and recording one of the most important records in pop history, pushing the boundaries of what had been achieved before. The movie also looks into their changing relationship with manager Brian Epstein, the influence of Maharishi Mahesh Yogi and the creation of their Apple Empire.

The film is a mix of archive footage from 1966/67 and interviews with friends, family, employees, contemporaries and Beatles experts (see below), though quite a few people, who were crucial in its success, are inexplicably missing, first and foremost of course Paul and Ringo, but also Peter Blake who designed the album cover. And another thing that is sorely missing from the film is The Beatles’ music. There is a complete absence of their music and the famous, iconic artwork of the Sgt. Pepper album, which should have stood in the forefront of the documentary. There is a lot of talk about the songs, music and the design of the cover, but as the film goes on, it becomes more and more apparent that just talking about it isn’t enough. The film’s score by composers Andre Barreau (Sliding Doors, Dangerous Parking) and Evan Jolly (co-composer The Crown/Hacksaw Ridge), recorded in both London and Prague with The City Of Prague Philharmonic Orchestra can’t compensate for this obvious flaw in the movie.

I had been looking forward to the movie and I did enjoy listening to the anecdotes and stories from the interviewees, but, especially without any of The Beatles’ input or original music, it did feel quite long, running just shy of two hours. Maybe next time it might be an idea to get the licence for the music and imagery before undertaking such an ambitious venture.

One thing is for sure, you’ll put the album on as soon as you get home to remind yourself of all those fantastic songs.

“The Beatles aren’t a rock n’ roll band, they are a force of nature, and they’ve been a big part of my life for as long as I can remember! – I’ve wanted to make this film since I was 9 years old!!!”

Alan G Parker has a background in the music industry, starting as a band manager/promoter in a remote part of Lancashire before moving to London in 1985 since then he worked as a press officer, a writer of 18 books, a journalist and the project co-ordinator in back catalogue at EMI Records, working with artists like Stiff Little Fingers, Buzzcocks, The Stranglers, Sex Pistols, Slade, The Ramones, Blondie, Big Country, The Alarm, The Who, Whitesnake, UFO, The Mighty Wah!, Spear of Destiny/Theatre of Hate, Terrorvision, The Almighty, Monty Python, The Carry On Team, UFO, Saxon, Whitesnake & The Jam. Since 2011 he has been working on documentaries, first as a researcher and later as a director, about, amongst others, The Sex Pistols, The Jam, The Clash, Staus Quo and Monty Python, which was Emmy nominated.

The Beatle’s drummer from 1960 to 1962, he was sacked from the group just before their major breakthrough. In the film he reveals his secret connection with the Sgt. Pepper album.

Tony grew up with the band in Liverpool, went on to work with Brian Epstein at NEMS before heading Apple Films and later becoming CEO of Apple Records. His memoir Magical Mystery Tours – My Life With The Beatles is one of the most popular books amongst fans and followers of the band. Tony gives a surprising account in the film about what the recording sessions for Sgt. Pepper were really like.

Sunday Times journalist, author and broadcaster and the only authorised biographer of The Beatles. With unlimited access to the group throughout the period which the film covers he is a fund of delightful first hand stories.

Author, rock manager, composer, record producer, film maker and public speaker. Co-writer of Dusty Springfield’s number one smash You Don’t Have To Say You Love Me he has also managed The Yardbirds, Ultravox, T-Rex, Japan, Asia, Candi Staton and Wham! Simon was very much at the epicentre of the music business in the summer of 1967 and provides extensive background to Brian Epstein’s sad decline and subsequent death.

Journalist, author and screenwriter who had major success in the 1970s with his two hit films, That’ll Be The Day and Stardust, starring David Essex, capturing perfectly the rise and downfall of a pop star. He was heavily involved with The Beatles in their studio years and recorded many interviews with them.

Bill was a fellow student alongside his friend John Lennon at the Liverpool College Of Art and Paul McCartney and George Harrison who attended the Liverpool Institute in the same building. He became a pivotal figure in the cities’ music scene in 1961 when he launched the Mersey Beat newspaper and is the author of numerous books about the group.

The Buzzcock’s guitarist Steve has been a fan of The Beatles since the age of seven and has vivid memories of the 1960s and the evolution of their music.

George Harrison’s sister-in-law after his marriage to Pattie Boyd in 1966. A successful model who also worked in the Apple boutique, Jenny travelled with the Beatles to India to learn from the Maharishi. Whilst there Donovan wrote his everlasting song tribute to her, the sixties anthem, Jennifer Juniper.

Regulars at the Cavern Club in Liverpool with the Beatles The Merseybeats achieved a string of top 40 hits in 1964 and 1965 and 2017 sees them celebrate 56 years together, making them one of the longest running bands in pop music history.

Beginning his career as a club DJ, Andy joined Radio 1 in the 1970s and was a regular presenter of Top Of The Pops. His was one of the last people to interview John Lennon in December 1980, just two days before his tragic death.

The author and journalist interviewed the band many times during the 1960s and provides first-hand accounts of their incredible story. His ground-breaking Beatles biography Shout! Was published in 1981 and has been followed by a succession of music books including biographies of both John Lennon and Paul McCartney.

Julia is the younger half-sister of John Lennon, the eldest daughter of John’s mother Julia Lennon and John ‘Bobby’ Albert Dykins. A tenacious guardian regarding the truth of her brother’s early life, her book, Imagine This, set the record straight on many unknown areas of her family’s extraordinary story.

Author of books on popular music, his 1994 tome, A Hard Day’s Write: The Stories Behind Every Beatles Song is an immaculately researched background to one of the greatest musical catalogues of the 20th century. He recently published Beatles ’66: The Revolutionary Year.

One of the most loyal employees of The Beatles, Freda was the group’s fan club secretary for a period of 11 years from 1962. Modest and discreet, she was highly valued by the group and has never set out to profit from her insider knowledge.

Barbara was at the centre of The Beatle world for many years, first as a secretary to Brian Epstein and later working for Apple. This is her first ever interview about her life at this time and she contributes one of the most revealing anecdotes in the film.