This summer, screen goddess Sophia Loren dazzles in HD in a trio of Italian cinema classics: Boccaccio 70’, Marriage Italian Style and Yesterday, Today and Tomorrow. These world cinema greats arrive on DVD and Blu-ray for the first time in both English and original Italian with improved subtitles – all complete with brand new special features in distinctive collector’s packaging courtesy of CultFilms.

Women take the lead in Boccaccio 70’, four arresting tales of women’s empowerment and the sexual revolution in post-war Italy, starring Sophia Loren, Anita Ekberg and Romy Schneider, in a superb HD remaster set for a Blu-ray, DVD and digital release on 26 June 2017.

The inimitable Federico Fellini (8½), the most renowned Italian filmmakers of all time, directs his first colour work, The Temptation of Dr. Antonio, which produced the unforgettable image of a giant Anita Ekberg (La Dolce Vita) coming alive from a billboard in an old man’s obsessive fantasy come true.

The Job, directed by Luchino Visconti (The Leopard, Death in Venice), stars Hollywood icon Romy Schneider (Sissi) as an aristocratic housewife who turns the tables on her philandering husband – featuring what Time Magazine described as “surely one of the most provocative stripteases to be recorded on film”.

Vittorio de Sica (Umberto D, Two Women, Bicycle Thieves) directs the one and only Sophia Loren (Two Women) in The Raffle, a comedy in which a woman puts herself up as a prize in a carnival raffle.

The portraits conclude with Renzo and Luciana (Mario Monicelli – The Great War) which follows the plight of a devoted couple hiding their love from their factory employers.

Marriage Italian Style, directed by Vittorio De Sica, reunites scintillating screen couple Sophia Loren and Marcello Mastroianni. Sparks fly when businessman Domenico meets former prostitute Filumena and makes her both his mistress and and manager of his pastry shop. All is well until he starts courting another, younger woman and he starts flaunting his new relationship in front of her. 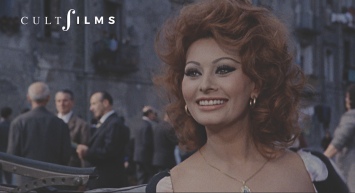 Adapted from a stage play by Eduardo de Filippo, this Italian melodrama was nominated for Best Foreign Language Film and Best Actress at the 1964 Oscars®, and won the Golden Globe® the same year for Best Foreign Film. This release also features Vittorio D, a tribute to the multi-awarded maestro filmmaker De Sica, with contributions from Clint Eastwood, Woody Allen, Mike Leigh, and Ken Loach.

This quintessentially Italian classic is comprised of three comedy vignettes that stand as a wry comment on Italian society. In the first, the stars are an impoverished married couple in Naples that, when Loren has a brush with the law, find they must keep her permanently pregnant in order for her to avoid prison. In Milan, we observe a bored and wealthy woman having an affair with a writer with whom she dreams of running away, that is until the day he crashes her Rolls Royce… The climax of the movie features one of the most famous striptease scenes of all time, when a call girl in Rome takes up a vow of abstinence but only after turning the head of a naïve young man preparing for the priesthood.

Special features include documentaries on both the director and the leading lady with appearances from Woody Allen, Giorgio Armani, Clint Eastwood, Mike Leigh, and Ken Loach. Don’t miss this release of one of the most popular Italian films of all time.

We have got a copy of Boccaccio 70’ on Blu-Ray to give away.

To win a copy, please reply with the answer to:

Name one of the three iconic actresses in Boccaccio 70’.

There are now four ways to enter:

Each time you answer or comment it will count as a separate entry, so you can have four chances to win. You can enter until midnight on Sunday, 16th of July 2017 and the winner will be contacted privately and announced on the London-Olios website. The winner has two weeks to claim their prize; if a prize goes unclaimed, we will have another draw.