Call Space Truckers an interstellar 90’s parody romp, a B-movie space opera, a sci-fi comedy, an intergalactic adventure – call it what you want, but we can promise you, you will be entertained. This film has become a cult favourite and it comes to UK Blu-ray for the first time ever in this newly restored edition complete with brand new bonus features, and courtesy of distributors Second Sight we have a copy to give away to one of our readers. 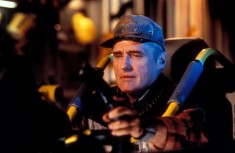 Get ready for space-travelling truckers, deathly machines and evil pirates in this movie from famed director Stuart Gordon (Re-Animator), starring award winning Hollywood star Dennis Hopper (Rebel Without a Cause, Easy Rider, Blue Velvet and many more) as John Canyon, a long in the tooth space trucker whose latest assignment is to carry a top-secret shipment and ask no questions. Joined by his girlfriend (Debi Mazar – Entourage, Empire Records) and a new rookie apprentice (Stephen Dorff – Blade, Leatherface), the trio runs into trouble when they cross paths with ruthless Pirate Captain Macanudo (Charles Dance – The Imitation Game, Game of Thrones) who discovers the mysterious cargo are an army of invincible killing machines that are headed for earth.

Buckle up for the interstellar ride of your life in this fun-filled 90s romp.

Name another movie Dennis Hopper has starred in.

You can enter once via each channel (duplicate entries will be deleted) and each time you do, your answer or comment will count as a separate entry, so you can have four chances to win. You can enter until midnight on Sunday, May 13th,  2018. There is one prize only and the winner will be drawn at random, contacted privately and announced on the London-Olios website. The winner has two weeks to claim their prize; if a prize goes unclaimed, we will have another draw.