My apologies for writing this review almost 2 weeks after I went to the press preview, but I was already ill when I went to see it and I have been suffering form a very severe and debilitating cold ever since. I do hope that I will finally get over it over the Christmas holidays.

Luckily the play is still on until January 12th, so there is still plenty of time to go and see this much beloved Charles Dickens story as told and acted by the national treasure that is Simon Callow in this beautiful, funny and exciting one-man show, which Dickens adapted himself for his own public performances. After sell-out seasons in 2011, 2012 and 2016 it has almost become a tradition to go and see it during the festive season and even if you don’t get around to see it until the new year, the heart-warming message of the tale is one that should not be ignored whatever the time of year. 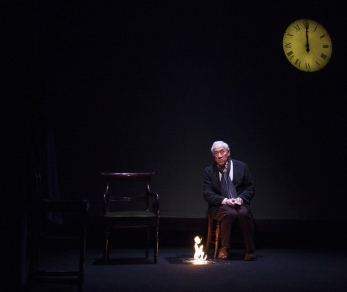 It is of course the story of tight-fisted miser Ebenezer Scrooge who gets visited by the ghosts of Christmas past, present and future and shown the effect his meanness has on other people. Ever since its original publication in 1843 it has caught the imagination of people. It was so popular, that within two months there were eight different stage productions and over the years there have been many more as well as movies, and the book itself has never been out of print.

Simon Callow is exceptional and outstanding, he is a born storyteller as well as actor, making this show his own. I can’t imagine anybody else being as mesmerising and spellbinding. Kudos for entertaining the audience and keeping it enthralled on his own for an hour and a half. The standing ovation was more than deserved.

This production of A Christmas Carol is by Assembly Festival, directed and designed by Tom Cairns, with sound design by Ben and Max Ringham, and lighting by Adam Povey. The minimalistic, yet evocative stage design is surely the other star in this production.

I hope you all get a chance to see it – it is magical!