There is a new pizza place in town and this one has a few surprises up its sleeve. It is the second branch of Lost Boys Pizza, the vampire & 1980s themed restaurant specialising in charcoal pizzas, which launched to great acclaim in Archway in June of last year by long-term friends and London hospitality experts, Alex Fisher and Peter Crozier-Clucas. This time it comes to Camden, and with some extra bite – a dedicated hidden absinthe bar, Croque Monsieur, in the basement. 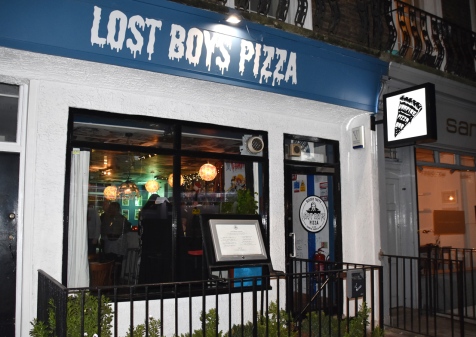 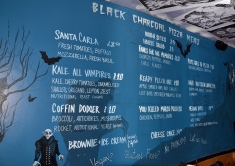 Their tag line promises ‘Bloody Tasty Pizza. Bloody Good Drinks. Killer Service’ strictly 80s soundtrack, so we went along last week to see what all the fuss is about and are pleased to report that it lives up to its promise on all fronts. The pizzas are bloody tasty, the drinks are bloody good, and the killer service is excellent. And the 80s soundtrack is pretty good too. 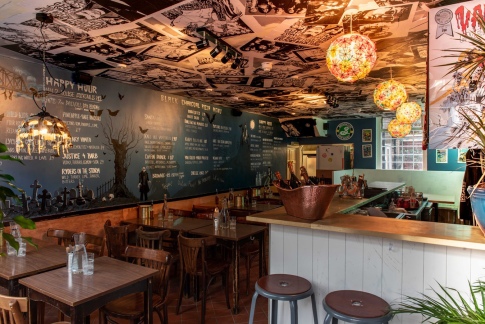 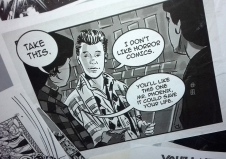 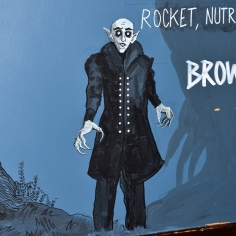 You can find this gem just around the corner from Mornington Crescent station, in Eversholt Street near the south end of Camden Hight Street. Lost Boys Pizza take their inspiration from 1987 cult classic Californian vampire movie Lost Boys, starring Kiefer Southerland, Jason Patric, Corey Haim, Corey Feldman, Dianne Wiest and Jami Gertz and the new Camden branch, which has the vibe of a Californian beach café, was inspired by the Frog Brother Comic Book Store in the film, with wooden tables and chairs, a ceiling plastered with black & white comic book pages and framed vintage comics on the walls. Also on the wall – saving paper – you’ll find the pizza and cocktail menus in a fun vampire-themed mural by local artist Isabella Farfan. The open kitchen is at the back of the restaurant, a bar with a brass panel top on one side and additionally to the seating inside, there is room for another 45 diners outside in the plant filled garden, with a retractable roof and heat lamps for winter and the promise of a paddling pool for the warmer months. Oh, and there is a slushy margarita machine. 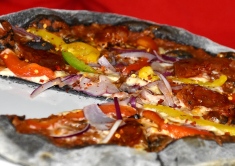 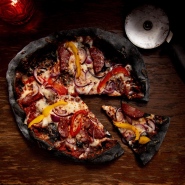 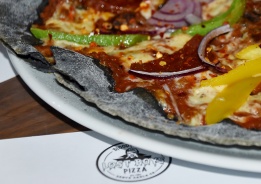 We loved the charcoal pizzas, with carnivores, vegetarian and vegans all equally well catered for at Lost Boys Pizza. We tried a selection of different pizzas – the spicy Fangs for the Memories (chorizo, peppers, onions, chillies), the citrussy vegan Kale all Vampires (kale, cherry tomatoes, caramelised shallots, lemon zest, oregano), Lost Boys Pizza’s take on ham & pineapple pizza Ready Pizza One (smoked ham, red chillies, Lost Boys spicy green pineapple relish) and, our favourite, the very cheesy Santa Carla (buffalo mozzarella, fresh tomato, fresh basil). All were excellent. Pizzas cost between £8.50-11. There are also starters and a salad of the day on offer, as well as desserts, including cheesecake.

So, what about the absinthe bar Croque Monsieur, I hear you ask. Well, it turns out that absinthe is a favourite tipple of Alex, one of the owners, and it has always been his dream to re-educate people about this spirit, which had (and still has) a bit of a ‘reputation’, to say the least. Banned in the USA until as recently as 2007, absinthe has a lot of ground to recover and this bar wants to be at the forefront of converting drinkers and show-casing absinthe in a fun environment, with masterclasses held by Jenny Griffiths and cocktails to show off the versatility of the ‘Green Fairy’.  Croque Monsieur might be tiny, but its mission is to give guests a wild and wonderful time. There is a green lit fountain with ice water on each table so you can louche your absinthe to perfection and you might also notice an array of silly hats on the walls, encouraging guests to wear and swap the head gear throughout the evening. 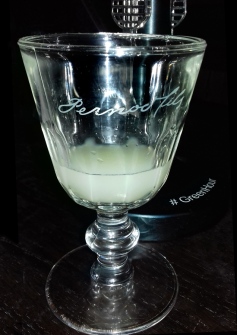 Croque Monsieur offers an extensive range of brands, from reversed engineered liquids to more traditional names, inviting you to drink absinthe louche (watered down) as well as in one of the delicious cocktails, like Le Croque‘Tini (Sauvelle Vodka, chocolate bitters, Oxygenee Absinthe, cheese on toast), Chocolate Old Fashioned (Four Roses and Combier chocolat with homemade chocolate bitters) or Death in the Afternoon (absinthe & champagne).