On from November 18th until December 2nd at The Curtain, 45 Curtain Rd, Hackney, London EC2A 3PT.

Zebra One Gallery curate this show of photos which had been gathering dust under beneath photographer Gus Coral’s bed for 60 years. Coral knew they would be popular but had no idea of their importance to British music and how long-lasting their success would be.

The Rolling Stones used to live with Coral’s cousin in Chelsea and the photographer was so blown away after seeing them perform in Richmond, in October 1963, that he decided to shoot the first tour of the then unknown band, supporting The Everly Brothers, alongside Bo Diddley. 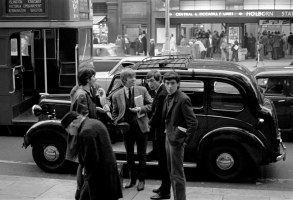 You can see photos of the band cobbling money together to cover their taxi ride to the De Lane Lea Studios – then in Holborn – and the smattering of people at The Odeon in Cardiff for the start of their tour, which was struggling to sell tickets. By the end of that tour, the Stones’ first single, ‘Come On,’ had climbed to number 21 in the chart and they were well on the way to become the superstars they are today.

The images are the earliest tour photos of Rolling Stones in existence, taken on the dates, Sharon Osbourne’s father – legendary music mogul, Don Arden – had persuaded Little Richard to join the tour to help with ticket sales.

Coral went on to document the recording session for their second single, ‘I Wanna be Your Man’ – originally a Beatles song – at De Lane Lea Studios. These also form part of the exhibition.

(Images from the private view at Tramp) 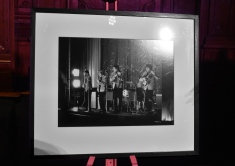 The show features 10 images, charting these important moments in rock history, which are part of a larger collection of more than 150 photographs, with more being released next year.

Zebra One Gallery’s Gabrielle Du Plooy says: “It’s extraordinary to think that photographs charting the very start of a seminal moment in music history had been forgotten about, until now. We can’t wait to share them with the world.”

The images are being sold exclusively through Hampstead’s Zebra

One Gallery and Blax UK are managing the catalogue.