Coinciding with the National Portrait Gallery’s ‘Vogue 100: A Century in Style’ exhibition, where a number of Norman Parkinson’s work will be on show, Eleven Fine Art and the Norman Parkinson Archive opened their exhibition dedicated to the influential and ground breaking fashion photographer this week.

Parkinson injected an easy and casual elegance into his images and changed forever the static, posed approach of his predecessors in fashion photography working with the super models of their day, including Twiggy and Jerry Hall, as well as movie stars like Ava Gardner and Anita Ekberg. 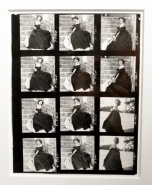 ‘Elegance in Vogue’ is a carefully curated selection of previously unseen vintage work along with posthumous prints documenting the transformation of fashion from the chic 1950 Paris couture dresses to the sleek sophistication of the 1960s, to the 1970s hippie look and beyond.