Though Lamb’s Conduit Street in London’s Bloomsbury has many lovely and mainly independent shops and cafés, it is slightly off the tourist beat. So it came as a bit of a surprise to find Cigala packed to the rafters when we arrived for dinner on an ordinary Wednesday evening; every table – but ours – was occupied (make sure you book ahead). The restaurant was noisy, but noisy in a good, buzzy way; people were obviously enjoying the food and each others company. Many diners seemed to know each other and the waiters; and the restaurant had a real neighbourhood vibe going. 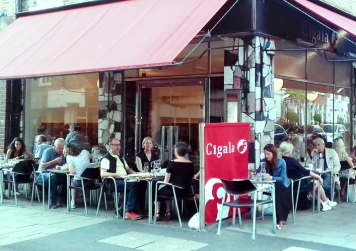 Cigala’s formula is simple, but it seems to work and it has in fact worked for more than fifteen years, ever since it was opened by owner/chef Jack Hodges, one of the co-founders of famed North African and Spanish eatery Moro: authentic Spanish food; stripped down, almost rustic décor and no rush to get you out of the door. Don’t expect designer furniture, expensive linen and silk wallpaper – people come here for the (mainly Catalan) food, made from scratch in the restaurant with fresh ingredients imported directly from Spain or bought daily from Billingsgate and New Spitalfields Markets.

The choice of main courses is limited, with just a handful of meat, fish and vegetarian dishes, but this is not what brings the diners to the restaurant anyway. It’s the various paellas made with Bomba rice imported from Valencia and the long list of tapas which caters to meat eaters, pescetarians and vegetarians alike that are the main attraction. The best thing to do, is to order a few dishes to share, then a few more and maybe another few a little while later. I love tapas because I love to try out a variety of dishes when I go to a restaurant. Give me meze, buffets, tapas, sharing platters – I like the concept of not having to decide on just one thing. Variety really is the spice of life for me – sometimes literally.

The pan con tomate – freshly baked and toasted bread with tomato, olive oil and garlic – was just like we remember it from first eating it in Barcelona many years ago. A simple dish, but one of the essential flavours of Spain. The plate of jamón y queso – smoky cured Serrano ham and salty Manchego cheese, with a drizzle of olive oil – was the perfect accompaniment. We also had the chorizo a la brasa – grilled homemade chorizo with fried breadcrumbs, peppers and cumin – which were meaty and crumbly and full of flavour and unlike any shop bought chorizo sausage. The croquetas de setas – wild girolles mushroom croquettes – were delicious, crisp on the outside and creamy and mushroomy on the inside. Our final tapa was calamares a la plancha – grilled squid with guindilla peppers and mojo verde – a lovely, delicately flavoured dish and something we love to eat but also something I would probably not prepare myself at home. We also had buey a la brasa – an aged 250g ribeye steak which comes with hand cut chips and churrasco sauce and it was excellent; full of flavour and beautifully cooked. 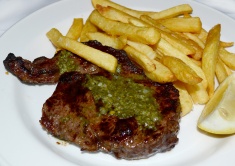 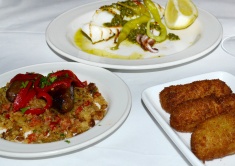 The dessert menu includes Spanish favourites like sopa Inglés (sherry trifle), arroz con leche (chilled rice pudding), flan de naranja (orange flan) and tarta de Santiago (almond tart), fruit salad and home made ice creams. I was intrigued by Mulhacen, named after the highest mountain in continental Spain (something for the next pub quiz), so I had to order it: orange and saffron jelly, bitter chocolate mousse and black bean ice cream (I had never heard of black bean ice cream but it is a thing and it turns out that there are plenty of recipes online). The ice cream is quite sweet, almost like a vanilla ice cream but with extra texture from the beans. The jelly was sweet and citrussy and the dark chocolate mousse counterbalanced it perfectly. 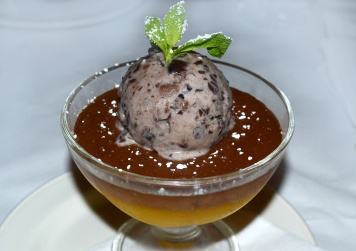 Cigala has an extensive list of Spanish wines (available by the glass or bottle), sherry and liqueurs.

Despite the restaurant being so busy, the service was friendly, efficient and swift. Prices at Cigala are slightly higher than usual for this kind of restaurant and the mark up on the wines is a bit steep, but we are used to that in London. It is in a nice and quiet neighbourhood, just around the corner from Great Ormond Street Children’s Hospital. It is also a favourite with legal and publishing professionals who have offices nearby.