Just To Get Married @ The Finborough Theatre

In Just to Get Married Cicely Hamilton, playwright, feminist and renowned suffragist, tells the story of Georgiana Vicary, taken in as an orphan by her aunt, Lady Catherine Grayle and family, who is approaching her 30th birthday and everybody, herself included, is convinced she needs to be married off and sooner rather than later. Georgie is witty and clever and has no desire to marry somebody she doesn’t love, but she has no skills either and rather depends on somebody to take care of her financially. Enter socially awkward Adam Lankester, guest of the Grayle’s, and by all deemed a suitable, if rather shy, suitor for Georgie – or, in other words, her last chance to get married.

As I was making my way home from the Finborough Theatre on Friday night I wondered how theatre goers in 1910, when Cicely Hamilton’s Just to Get Married was first performed, felt about this play. I tried to imagine what the women and men talked about on their way home from the theatre and what they told their friends about it the next day.

Because, you see, though it is a romantic comedy, in its second act it turns into something else entirely. Where as in the first act the subject of marriage for socio-economic reasons rather than love is told in a humorous way, after the interval we find ourselves observing the agony, shame, misery and pain such a decision can bring with it – for all parties involved. And this is also the time you find yourself realising how relevant this play is over 100 years later – now, in the 21st century, because despite how far we have come in the equality of the sexes, this kind of marriage is still on the cards for many women.

I really enjoyed watching the whole cast, but I have to single out Philippa Quinn, who is excellent as Georgie, and Jonny McPherson who plays Adam Lankester. These two get the chemistry between the two leading characters just right and you often find yourself wondering who you should feel more sorry for. Nicola Blackman and Simon Rhodes give a lovely performance of the bickering but loving couple Lady and Sir Grayle. Joanne Ferguson as Georgie’s married friend Mrs. Macartney and Tania Amsel as her free spirited artist friend Frances Melliship are the little devil and angel on her shoulders, one very much in favour of Georgie marrying, the other trying to tempt her into joining her in her bohemian life in London. In additional roles were Lauren Fitzpatrick (Bertha Grayle), Joshua Riley (Tod Grayle) and Stuart Nunn (Footman/Dobbins). 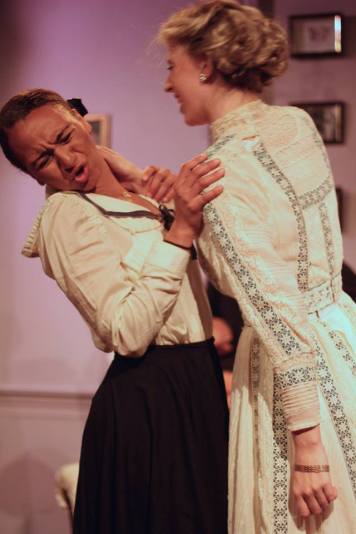 It’s been a while since I last saw a period play and Just to Get Married reminded me again why I like them so much. Any play takes you to a place you know nothing, or very little, about, but a period play takes it one step further, as it lets you catch a glimpse of a bygone era. It is more than just a history lesson, because it gives you an insight in what living at this time was like for an ordinary person and how people dealt with life. It is a connection to our past and the generations gone before us.

Cicely Hamilton was born in London in 1872 and, after a short career as a teacher, became an actress and later a successful playwright. She was active in the suffragette movement and in her polemic, Marriage As A Trade, she argued that women were brought up to look for success only in the marriage market and that this severely damaged their intellectual development. She was also an auxiliary nurse during the First World War, ran a repertory company and wrote as a journalist about women’s issues. Cicely died in 1952.