My first job as a bookseller was in Foyles bookshop on Charing Cross Road in the mid-1980s and, after a few weeks working as a cashier, I was given the cookery department to look after. Over the next 20 odd years that I spent in bookselling, working for a variety of companies, I always volunteered to look after the Food & Drinks department and even when I was a manager that was the one section I could not give up. Over the years my personal cookery and drinks books library has grown year by year, taking over several bookshelves, the top of my fridge freezer and every other nook and cranny in my kitchen; and it is my pride and joy. I am always on the lookout for new additions and books on the shortlist for the André Simon Food & Drink Book Awards always make the list. 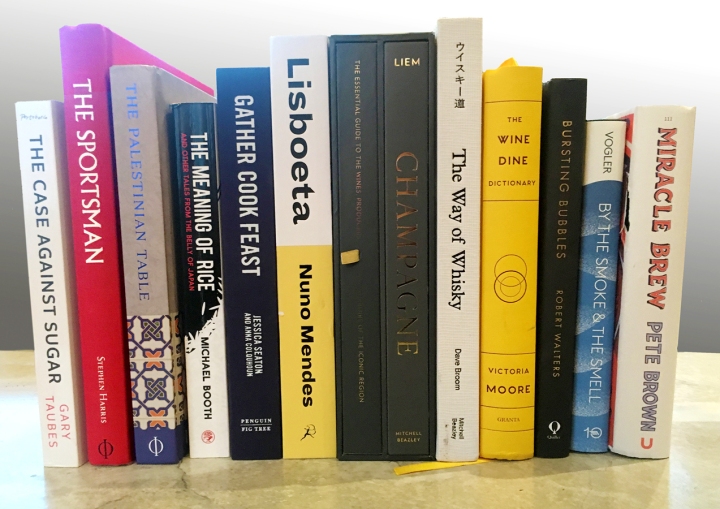 Founded in 1978, the André Simon Food & Drink Book Awards are the only awards in the UK to exclusively recognise the achievements of food and drink writers and are the longest continuous running awards of their kind. With just over 2 weeks to go to the ceremony, when the winners will be announced at a ceremony at the Goring Hotel in London, let me tell you a little bit about this year’s shortlisted books. They were selected from more than 150 submissions and showcase the best of contemporary food and drink writing according to this year’s panel guided by award-winning journalist Rachel Cooke and wine expert for The Wine Show, Joe Fattorini.

Nicholas Lander, Chair of the André Simon Memorial Fund says: ‘This year’s shortlisted books take readers on a world tour from Kent, the Garden of England, all the way to Japan, with stops in France, Portugal, Palestine and Mexico. This year’s food submissions range from recipe books inspired by world-renowned restaurants to polemics about the health consequences of the food we eat. Our short-listed drink books reflect our varied drinking tastes today from wine to whisky; Champagne to beer.’

The Case Against Sugar by best-selling author Gary Taubes (Why We Get Fat) is a hard hitting, eye-opening exposé making the case that sugar is the tobacco of the new millennium.

The Meaning of Rice takes food and travel writer Michael Booth and his family on an epic, and often hilarious, journey, travelling the length of Japanto explore its food culture.

In The Palestinian Table, Reem Kassis unveils more than 100 easy-to-follow recipes inspired by three generations and provides a rare insight into the heart of the Palestinian family kitchen.

Gather Cook Feast by Jessica Seaton and Jessica Seaton celebrates the connection between the food that we eat and the landscapes that produce it with ingredients from the seas, the rivers, the farmland, the gardens and the wilds.

The Sportsman is the debut food book by self-taught chef Stephen Harriswho transformed what was once called a “grotty run-down pub by the sea” on the coast of Kent to a Michelin starred restaurant, telling the story of the restaurant’s transformation and over 50 recipes.

In Champagne, Peter Liem provides an extensive list of growers and vintners from the French region, based on six years of on-the-ground research on how and by whom these iconic and sought-after wines are made.

Pete Brown’s Miracle Brew explores one of the popular drinks on the planet, beer, revealing the role each of four ingredients – malted barley, hops, yeast and water – play in its creation and its distinctive taste.

Dave Broom travels to Japan in The Way of Whisky to tell the story behind some of the country’s best whiskies, exploring the history of each distillery and the role of craftsmanship behind this fascinating drink culture.

In By The Smoke and The Smell, Thad Vogler takes the reader on a world tour to meet with the vivid characters who produce hand-made spirits such as rum, scotch, cognac and mescal at small-scale distilleries

Wine journalist and expert in the psychology of smell and taste, Victoria Moore’s Wine Dine Dictionary is a handbook making it easy to pick the perfect bottle of wine for dinner or to decide on what food to have with a special bottle.

Good luck to all the authors!